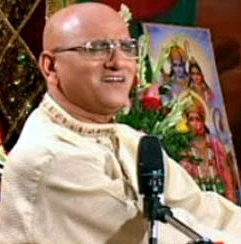 Rajinder Kachroo is well known name in the field of devotional and Sufi music. The talented singer has enthralled music lovers all over India through his concerts and audio cassettes. Blending his artistic talent with the changing musical scenario, he has accomplished a difficult task of producing quality music, which is successful commercially too. Rajinder Kachroo is a well-trained classical singer, who has experimented with the different forms of music, light classical, folk and devotional music. His success can be attributed to the fact that he has rich experience in presentation and production of music. Rajinder Kachroo has a natural talent for composing music and he has given some great devotional songs to the listeners.

Rajinder Kachroo has been in the field of singing for the last three decades. He started at an early age of six with a performance at the Kheer Bhawani temple in Kashmir with a scintillating performance. Since then he has never looked back. Trained in classical form of music by Pandit V.P.Dhar and Pandit Mani Prasad and in light music by Satish Bhatia, Rajinder Kachroo has so far performed not only all over India, but abroad also. He has wide following, which can be gauged from the fact that his R.K. fan club has arranged for him to perform in more than 20 U.S. cities time and again since 1986. Earlier in 1982 he visited Britain and enthralled audience by his performances on a trip sponsored by the prestigious British Council.


Rajinder has done great service to Kashmiri music by bringing out around half a dozen cassettes on Kashmiri folk music & devotional songs. He has already sung more than 200 Kashmiri songs on radio and is a well-known name to the listeners of Radio Kashmir. Rajinder Kachroo is top grade artist of All India Radio and TV. Rajinder is an ardent believer of Indian values. He practices Yoga, Pranayam and meditation on daily basis. His music therapy with the principals of Ashtang Yoga, have proved beneficial in the case of persons with depression. Those addicted to smoking or drugs have benefited greatly by his therapy. His desire to teach children the nuances of yoga and Pranayam has now become his passion.