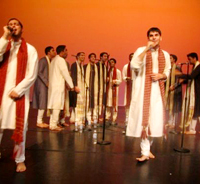 Penn Masala started in a dorm room in 1996 with four friends. Their breakout performance came in 1998 at Bhangra Blowout, a showcase of Indian fusion music. The group toured to other college campuses and Indian events in New York, Los Angeles, Chicago. Then, Toronto and London.

Penn Masala was featured on the soundtrack for the 2001 movie American Desi, about a New Jersey college student and his traditional Indian parents -- another ethnic subculture hit.

In 2002, the group performed at the Star Screen Awards in Mumbai (formerly Bombay), India. Earlier this year, Penn Masala released its fifth album, Pehchaan, Hindi for identity. In September, Penn Masala performed at the Kennedy Center in Washington, D.C., for a show marking the 60th anniversary of India's independence from Britain.