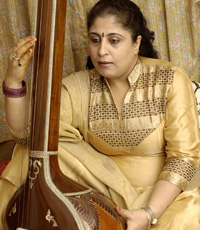 Neerja is an acclaimed playback singer in the Hindi film music world. She is a name to reckon with in the world of Kashmiri folk music. She has been a disciple to great names in the music world like Pt. Shambhunath Sopori and Pt.Bhajan Sopori and well known music director Shri. Shambhu Senji. She has done her Masters in Music from Chandigarh University. Presently she is from Sarangi Maestro Shri. Dhruv Ghosh.

She is the winner of Rapa Awards for her title songs in Sarhad and Tere Mere Sapne. She has also sung several title numbers for serials like Mukkammal, Gul Gulshan Gulfam, Shapath, Noorjehan Filmi Chakkar, Nageen and many more. She has lended her voice to films like Sheen, Yeh Dil, Indian Babu Lalchi and the very recent Traffic Signal with renowned Music directors like Nadeem Shravan ,Shamir Tandon & Dilip Sen-Sameer Sen.

Besides Hindi films she has number of successful Kashmiri albums like Chashme bu Wondai, Yaadvotur, Patram Pushpam and the recent Kashmiri Club Mix to her name. She also sung in number of devotional albums like the Durga Kavach with Gundecha Brothers, Sant Sarovar with Udit Narayan, Suresh Wadkar & Mohd. Aziz., Shabd (Guru Teg Bahadur Boliya). Her latest released album is with her son Kashmir Club Mix. She has recently completed a Sufi album. Music is by her son Raj Pandit. She has performed all over the country and also abroad in countries such as Mauritius, U.S.A and U.K.