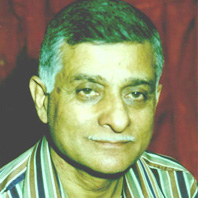 MKR was till recently editor of 'aalav' published from Bangalore and 'Milchar' published from Mumbai. He is currently the editor of monthly 'här-van', the net-journal of Project Zaan. MKR was instrumental in development of Akruti-Kashmiri-Arinimal software for writing Kashmiri in Standardised Devanagari Script in association with Cyberscape Multimedia Ltd. MKR hails from Chhattabal, Srinagar, Kashmir. Post-exodus, he is settled in Mumbai.