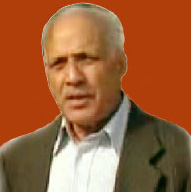 K.N. Pandita: Born in Baramulla, Kashmir in 1929 did graduation from St. Joseph’s College in Arts with English literature. The tribal raid of October 1947 destroyed his family like hundreds of other Kashmiri Hindu families in Baramulla.
After doing M.A. from Punjab University, he served as Lecturer in State Degree Colleges and in 1958 earned a scholarship from the Indian Ministry of Education for higher studies at the University of Teheran, Iran. Four years of study and research at the University of Teheran earned him a Ph.D. in Iranian Studies. He joined Kashmir University in 1963 and it’s Centre of Central Asian Studies in 1976. He rose to become Professor and Director of this Centre till his superannuation in 1987. He is not only the first Kashmiri to obtain Ph.D. from Teheran University but is also the first to have worked in close collaboration with a number of Central Asian Academies of Science particularly the Tajik Academy. His travelogue titled My Tajik Friends won him Sovietland Nehru Award 1987.