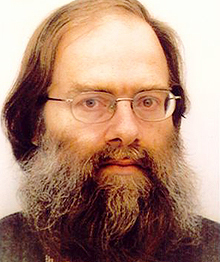 Dr. Koenraad Elst was born in Leuven, Belgium, on 7 August 1959, into a Flemish (i.e. Dutch-speaking Belgian) Catholic family. He graduated in Philosophy, Chinese Studies and Indo-Iranian Studies at the Catholic University of Leuven. During a stay at the Benares Hindu University, he discovered India's communal problem and wrote his first book about the budding Ayodhya conflict.

While establishing himself as a columnist for a number of Belgian and Indian papers, he frequently returned to India to study various aspects of its ethno-religio-political configuration and interview Hindu and other leaders and thinkers. His research on the ideological development of Hindu revivalism earned him his Ph.D. in Leuven in 1998.

One of the early signs of schizophrenia is a constant state of confusion. This is then reinforced by sudden changes in behavior and personality. Read more

It got Romanized [Latin alphabets] in 18th century. This language has precision in thought and content and is metaphysical too. Read more

Useful Tips Can Bolster Your Wellness

Unhealthy diets pose a greater risk to morbidity and mortality than does alcohol, drugs and tobacco use combined. Read more

Fish is an important Kashmiri delicacy usually cooked on religious occasions like 'Gaada Bata' in the month of December, Read more

One of the most beautiful country in the world, the landscape in this island nation is simply inspiring with lush green fields, snow peaked mountains, lakes, rivers, streams Read more

The Lamp of the Dharma Kshetra

What prompts you to be Dhananjaya ----the Arjuna of Mahabharata? Read more

The Harmonius Journey of a Musical Family

The real occupier is Pakistan which has occupied the north west part of Kashmir which belongs to India. Read more

Mahatma Gandi Dharma Seva Award is bestowed upon those individuals who have worked tirelessly and selflessly for the greater good of Sanatana Dharma and the Dharmic community. Read more