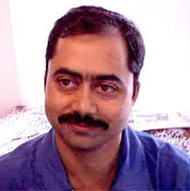 Worked with eminent theatre personalities like M.K.Raina, Nadira Babbar and Raj Babbar. At the time of Gul Gulshan Gulfam Ihad privilege to work with Parikshit Sahani
Received “Ashish Samman,” at a glittering function held at Jammu by Bhagvaan Gopinath Trust on 20th of December 1998. Received “Ksemendra Award” for the excellence in performing arts on Feb. 19th 1995 by AIKS, New Delhi at Kamani Auditorium New Delhi after the performance of famous Opera, “Reshvaer” the abode of Rishi’s.