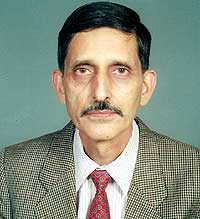 Born 1944 in Kashmir -of the then undivided India- ‘Brij’ comes from a family of Khar’s who for generations lived in a suburban part of Kashmir’s capital city ‘Srinagar’, in a hamlet called ‘VicharNag’ (close to where the prestigious ‘Sher-i-Kashmir National Medical Institute’ stands today). The family for various reasons moved over to interiors of the capital city located on either side of river ‘Jehlum or Veth’, where ‘Brij’ was born, raised and received his school/college education. The valley’s enchanting landscape, folklore, frequent countryside sojourns -‘VicharNag’ included-, Kashmir’s distinct brand of composite culture manifested in mutual accommodation/tolerance and catholicity (as prevalent then) and teachers like the well known Kashmiri Philosopher-Poet ‘Nadim’ left an inedible mark on his impressionable mind during early and teenage years.


‘Brij’ received his higher education at Punjab University, Chandigarh where he obtained a Masters in Geology with distinction. He worked for India’s premier oil company ‘ONGC’ for almost four decades before separating as Executive Director on superannuation. A freelancer now, his interests besides Petroleum Industry & Earth Sciences include Writing, Knowledge, Technology and Health issues. Widely travelled he now lives mostly in the sub-Himalayan Doon valley.