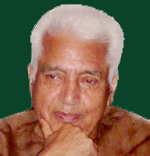 A journalist by profession, a scholar by temperament and a writer by choice, Gopinath Raina was inclined to the study of religion from his very young age. It was Swami Vivekananda’s dynamic exposition of Hindu thought that fired his imagination while he was still at school, and by the time he entered college, he had been drawn to the writings of Gandhi, Aurobindo, Narayana Guru, Radhakrishnan and Bertrand Russel.

He has been writing profusely on various aspects of Hindu thought. He enjoys writing, particularly on saints and sages, not only of Kashmir, but of the other parts of India as well. Presently he lives in Miami, and spends his time writing personal memoirs.