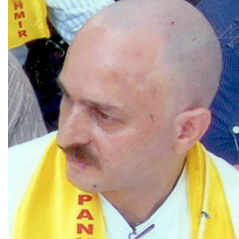 Ramesh Manvati, is a descendent from the family of late Pt. Thakur Joo Manvati, one of the great saint-scholars of Kashmir in modern times, he is an accredited opinion maker on the future of Kashmiri Pandits. For the past two decades, as a member of Think-Tank Group of Kashmiri Pandits, Ramesh Ji is engaged in deliberating issues and solutions that confront the beleaguered Pandit community. His seminal views have appeared in several national papers like The Hindustan Times, The Times of India and many other journals and important community publications of the Pandits across the country. He has participated in many conferences and seminars in the country dealing with the issues of ‘Internally Displaced’ Kashmiri Pandits and terrorism. As a core member of Panun Kashmir, he has also been actively involved in organizing historical and prestigious 1st and 2nd “World Kashmiri Pandit Conference” held in New Delhi in 1993 and 1998 respectively and also the “3rd World Kashmiri Pandit Conference” held in Jammu in the beginning of year 2009.


As a writer, Ramesh Manvati also edits the prestigious National Capital Region KP newsletter - Paannyaar. He also is a member of several reputed organizations and literary groups of Kashmiri Pandis that are engaged in Institution Building Model strategy for the post exodus rehabilitation of the ‘Internally Displaced’ Pandits. Ramesh Ji has also been an avid photographer and a keen trekker. He has trekked to most of the important pilgrim centers of Kashmir which also include Gangabal, Holy Amarnath Cave, Vishnupaad (Kongwatan), Naraan-Naag and Harishwar etc.

Ramesh Manvati has also co-authored (researched and compiled along with S.N.Pandita) a photo-heritage book titled “A Photo-Portrait of Kashmiri Pandits”, which was released in New Delhi in year 2007 by Sh. Jagmohan, former Governor of J&K State. Presently he is working on two books, including a translation work.