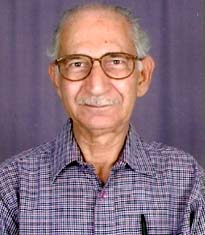 Hryday Nath Kaul (Karihalloo) was born in Jan 1934 at Bagsundar, Chattabal, Srinagar. After graduating from J &K University, he acquired a degree in chemical engineering from Delhi University. His first employment was in nangal fertilizers, naya nagal (Punjab). The major part of 36 years of his service was with Dept. of Atomic Energy from where he retired as an Executive Director, Heavy Water Board in 1992.

Poetry, story writing, commentaries in Kashmir, English, Hindi and Urdu has been Mr. Kaul's favorite pastime since his youth. While in service he has off and on contributed to magazines published by Kashmiri associations in India. After his retirement, Mr. Kaul under pen name "RIND" has indulged in his passion and favorite avocation whole heartedly and his poems, gazals, nazams commentaries and stories have been appearing regularly in Koshur Samachar, Naad, Vaakh, Milchar, Kshir Bhawan Times and other magazines published by Kashmiri associations in various Indian cities.

"RIND" presently resides in varodara, gujrat and has published a collection of Kashmiri and Urdu poems in devnagri script .The collection is titled Firaq-e-watan.