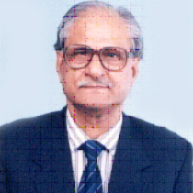 Dr. B. K. Moza, presently a pharmaceutical adviser, has had a distinguished career in research, technology and management of Pharma Industry. He had early education in Srinagar Kashmir.Despite having topped the list of meritorious candidates in his determining Intermediate in science (Medical) degree, he was denied the State controlled nomination for MBBS studies in 1950 because of discrimination as a Kashmiri Pandit.. This caused his internal displacement and he had to look for a career in Pharmaceutical Sciences. Graduating from Panjab University, he was selected for post-graduate scholarship at Bengal Immunity Research Centre, Kolkata, only one of its kind in those days in India (1954).He specialised in the chemistry of Natural Products and got his post graduate degrees. He, further obtained his doctrate degree from Academy of Natural Products, Prague. Had collaborative studies with Research Centres in America and Japan which he continued after returning back to Calcutta (1964). Had a distinguished research career of more than two decades resulting in the isolation of more than a dozen of new molecules and their structural ellucidation and around fifty publications. After two decades of fundamental research, he joined Industry, Tata-Fison / Rallis India, where he had another two decade’s career of technology related and management responsibilities.He has been the Convener of Scientific Services of Indian Pharmaceutical Congress for a decade in its fomative stages. He has been associated with most of the Universities providing Pharmaceutical education in India. He has received the Acharya P. C. Ray Award and gold medal (1984) for his contributions to Pharmaceutical profession. He is a Fellow of the Institution of Chemists, India and a Fellow of Indian Pfarmaceutical Society. Has been on the Editorial Board of Indian Pharmaceutical journals.

He is a founder member of Kashmir Sabha , Calcutta, founded in 1955 and has been associated with its official organ the Vitasta. Besides being the editor of this monthly publication for decades he has brought out a large number of its reaearch based, thematic Annual Numbers on Kashmir and Kashmiri Pandit history, literature, culture and heritage.. He has been associated with Kashmir Bhawan, Kolkata and Kashmir Bhawan movement for preserving Kashmiri Pandit Identity. Kashmir Bhawan and researches on Kasmiri heritage have been his passion. He has also contributed to the concept of AIKS as the Apex Coordinator of Kashmiri Pandit organizations, right from its inception in 1981. Though displaced from Kashmir at the age of seventeen, he has love for his mother tongue; writing Kashmiri poems has been his another passion..

He is happily settled in Kolkata with his wife Uma and son, Vidya Ratan married to Pratbha and grand sons Kashyap and Kalhan, the former recently married to Anamika. His daughter, Kalpana married to Dr. Akhilesh Fotedar, is settled in New York, along with grand daughters Archana and Arti. He has travelled a lot within India and globally in Europe, Japan and America.