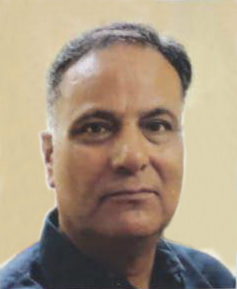 His formative years and youth were influenced by the tranquility and the mayhem prevailed alternately in the valley of Kashmir. The poignant events coupled with the boundless bliss of bountiful scenic and climatic diversity created an indelible imprint of speckled sensibility that set him apart. As such, Bhupendra realized that the web of weaving concepts was far more challenging, so he chose to tread the path of conceptualization instead of weaving fabrics, for which he was trained professionally. Creating his own expression, and enlivening the dreamy visions, he made foray into the ad-world. He has attained hands-on knowledge of Hindi and Urdu besides English with the unique ability to blend classism with colloquialism being his forte. His pen has been like an unrelenting and gushing oasis that has endeared his readers for nearly two decades. His versatility as a writer and poet is showcased as he is among the few who can write in prose as well as poetry with equal ease mirroring the eclectic genres. His thirst for constant innovation and exploration remains unquenched even after working on many prestigious projects. Participated in ‘Art Wanderers’ exhibition at AIIFACS-N.D IN 2017